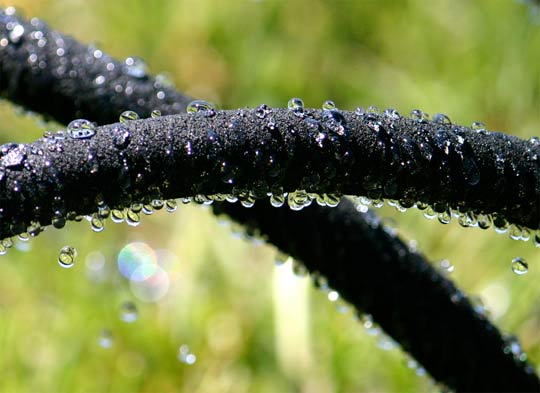 Well, the waiting is over and we have - so far - water in the pipes and no leaks.  Mind you there was a stall when I noticed we forgot to glue one of the connectors, but a couple of hours of drying later and I was able to flush the system.  This meant going to the farthest of the garden valves and opening it up.

Phew! What a horrible vapor and no doubt toxic resin water came pouring out.  I strategically positioned a pail under the spot to gather the evil water and toss it where nothing is growing and dogs are not allowed.  After the water cleared a bit (four pails later), I went to each of the new hose bibbs and garden faucets and ran a couple of gallons from each.

Finally the lines were clear enough of glue residue and trapped dirt they would not harm the new soaker hoses.  Yesterday while waiting for the watering system to dry, I positioned four of the soaker hoses into various beds.  Now I could hook them up and get my first idea of how they were going to work.

I have to say that in order to get your soaker hose just the way you want them, you will need to secure them with some sort of landscape pin, or in my case, thick wire cut into a U shape.  So far the hoses are all working just fine, but I will need to experiment with how much to turn on the faucet and how long they should run.  One of the beds seemed to immediately become saturated and ran water into the pathways.  I think the problem was just part of the hose too close to the edge, or maybe it had too much water pressure.

The other thing is that I have two types of drip hoses.


In this corner we have the Gilmour Flat Soaker Hose:

In this corner we have the Swan Round Soaker Hose:

So, much like everything else in my garden, the soaker hoses are in competition with one another.  The prize for the victor is more of their kind added to the garden.   So Gilmour and Swan - let's see who wins my love and who becomes yet another story of garden gadgets gone bad.  Stay tuned...
Posted by Julie Byrd at 9:11 PM