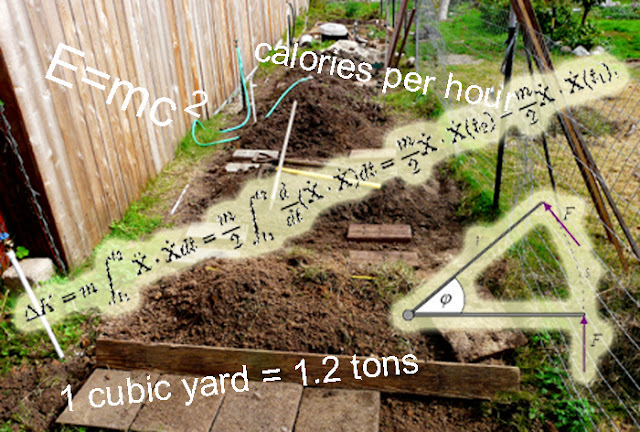 It's 12:34 and I have just exited the garden for the first time today.  I will likely be back in it two or three more times today.  This first venture was for just under two hours which is a bit short for my typical time on a Sunday morning.  Usually I am in the garden before 9am and there until close to noon.  As I was pondering my time spent with the greenery, I realized that gardening is much like any business venture.  You must put in a lot of capital prior to gaining any revenue.  In the case of the garden, things like capital and revenue mean different things than in the business world and I decided to break down just what the garden 'expenses' versus 'gains' really is.

Here are some other statistics that will impact the total 'expense' of the garden.

In the ceder fence area there are ten 3 ft by 6 ft garden beds that were completely rebuilt in a way that required the earth to be dug down at least three feet.  Nine of these beds are sided with ceder boards and one of these beds is sided with large rocks.  There are pathways around these beds that are paved with sixty 6 inch by 8 inch concrete paving stones and over 60 bricks.


The center garden bed is a 12 ft by 12 ft space that I completely remodeled which means digging at least three feet in depth and removing a two foot by 12 foot rock pathway.  In this space I now have two 3ft by 6 ft beds sided with large rocks and surrounded by a stone pathway that has over 60 feet of area.


The grapefruit garden bed consists of two 3 ft by 3 ft beds and a 3 ft by 6 ft beds.  These beds are sided with large rocks and there is a stone pathway two feet by six feet long.


So, knowing these basic statistic I have come up with the following items regarding each garden bed.

Total caloric expense:  This bed took 3 hours of heavy digging (1800 calories) and one hour of moving paving stones (600 calories) plus an hour of light digging and planting (300 calories) for a grand total of : 2700 calories.

So, in order to basically reach where I am in the garden zone right now I have moved over 25 tons of earth and I have expended over 36,600 calories.  The time I have spent just getting these beds ready is over 73 hours of actually doing labor.  That does not account for the amount of time I am just dazed and staring at the work that still needs to be accomplished.

Now to fully understand the full impact of the weight we are talking here I thought I would compare it to some images that might help the reader better understand the magnitude of effort we are discussing here.

Or in a way that is more specific to garden terms...

There is also a wage of exercise paid in order to do this type of intense gardening.  In order to be able to move these tons of earth I have to do strength training.  Gardening is not exercise although it does build strength.  In actuality, you build the strength in order to be safe in your gardening.  If you try to get strong just by gardening alone you may find yourself injured.

The worst thing about this equation is that there is a great chance of failure.  Not only might I do something wrong and screw up the crops, the weather and other forces might conspire to rob me of any gardening profit.

Right now I am going on hope and the basic psychological benefits gained from doing hard labor in something you love.  Will my garden pay me back?  We will have to see.  At least it is keeping me off the streets.