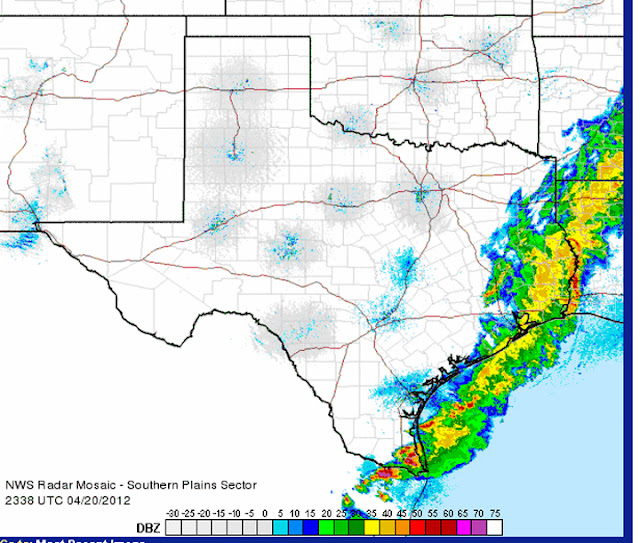 Little was I expecting this morning when I awoke that by the end of the day I would be dealing with "GARDEN DRAMA" ... cue the intense music.

The weather reports talked about a front moving through and quite frankly I was looking forward to a little more rain and cooler weather.  'How nice,' I was thinking, 'a little more spring before the hot weather settles in.'  How naive of me.  Nature is nothing but an opportunistic drama queen looking for a stage.

Was I worried when I heard the weather report stating that there would be 'thunderstorms' and 'wind' and possibly 'dime sized hail' - pfft - of course not.  Am I not a veteran of 'weather'?  Have I not lived my life in southern coastal Texas where weather is an action verb.  I have been 'weathering' storms all my life so I was not about to raise an eyebrow at something as simple as a spring front blowing through.

So okay, it was a little dramatic when the storm hit and immediately blew the transformers at my office.  And yes, okay, I did step away from the windows for a few seconds when the bushes outside the windows looked like they were trying to come inside.  Yep, the wind looked a little whippy and the sky a little greeny and I did the prudent thing and moved a little more inside the building I was in.  No sense tempting the tempest to throw a branch through a window.


But hey, being the cool nonchalant weather hardened person that I am I quickly returned to the window area.  After all the front had hit and that meant the worst of the storm was essentially over.

Did I spare a thought for the garden - no.

Well, while I was working in darkness my husband was observing the storm on the home front.  He described it as at first just rain and wind then he thought he heard a couple of hard sounds... like hail.  Then he heard more hail and went out on the back porch to find it was hailing pea sized ice.  Then it was garbanzo bean sized and finally it was maybe dime sized.  For about three minutes.


When he told me this after I got home my first thought was 'goodbye garden' because three minutes of dime sized hail might not be much to your roof or your car, but it can be vegetable murder to a garden.

I went out with much trepidation to check out the damage...

The bush beans were tussled and some of their cages had been knocked over as if a very rude bunch of air had sat on top of them.  The were disgruntled but okay.  The okra plants looked stunned but otherwise none the worse for wear.  Same for the cucumbers, the squash, the collard greens, the onions, the other cucumbers... it all looked okay.


Yes, Bunny lost a major limb and two pounds of fruit.  Shudder!  I broke the news to the dogs and this was their reaction:


I know it might look like he is just relaxing on the kitchen floor, but I tell you he was stunned!  Just look at his eyes:


The Border Collie was not much better:


We will get through it all right.  Bunny Tomato is sure to rally with her other limbs and devote even more resources to the remaining dozen or so tomatoes she has set.  I am sure in time the dogs will get over their emotional upset.   No doubt a serving of fried green tomatoes will help us all.
Posted by Julie Byrd at 7:00 AM