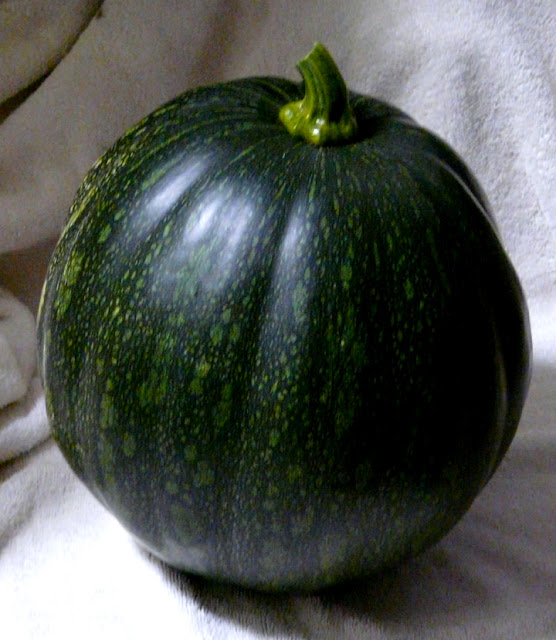 It was a vegetable mystery.  It crawled under our fence from some neighbors yard and set up shop in an otherwise desolate area of our garden.  Somehow, despite the heat, despite the lack of rain and despite the hard packed cracked earth, this plant seemed to thrive.

That it was a vine there was no doubt.  It sprawled in abundant viney growth.  Its tri-pointed leaves were dark green with strange lighter almost silver spots.  It had plenty of blooms, but they all seemed to be male blooms without a single fruit to let me know just what it was. 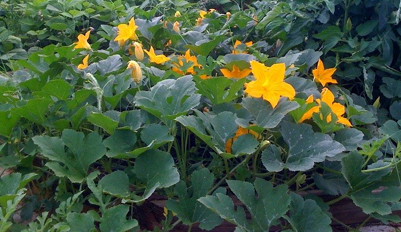 Since it was the hot time of year and since the thing was far away from the part of the garden I was actively gardening in, I mainly ignored it.  I thought about it a little, especially when I first saw its strange silver dotted leaves because I initially worried it had some sort of powdery mildew that could bother my plants.  Closer inspection showed the lighter areas were just the nature of the plant.

Other than noticing it, I pretty much forgot about it.  Fall came and when the heat broke the mystery plant was quite entrenched in our yard.  It seemed to have multiple rooted areas so it did not matter if one part of the vine was cut or crushed.  The other parts being rooted still thrived.  I searched again for any sign of a female bloom.  Just what was it?  A squash?  A melon?  I figured it was something growing outside of its element and the conditions would just not let it reproduce.

Then in late November I found some fruit.  The plant had been growing so vigorously that its leaves hid large patches of where it was growing.  I found three round fruit with dark green and mottled rinds.  They were all different sizes, but the largest was about seven inches across.

I resolved to harvest the next weekend.  That day came and I forgot all about the mystery fruit.  In fact three or four weeks passed and here it was now December.  I went out again and this time harvested the now soccer ball sized fruit.

Melon or squash?  A few days later we cut into it and found out it was a squash.  It was very firm like a winter squash and very tasty as well.

But exactly what was it?  I searched the internet for green round squash and several candidates came forward, such as Eight Ball squash.  However, the description of that squash did not totally match the plant we had.  Still not quite sure what we had, but encouraged by its growth and taste we saved and dried the seeds to plant the next year. 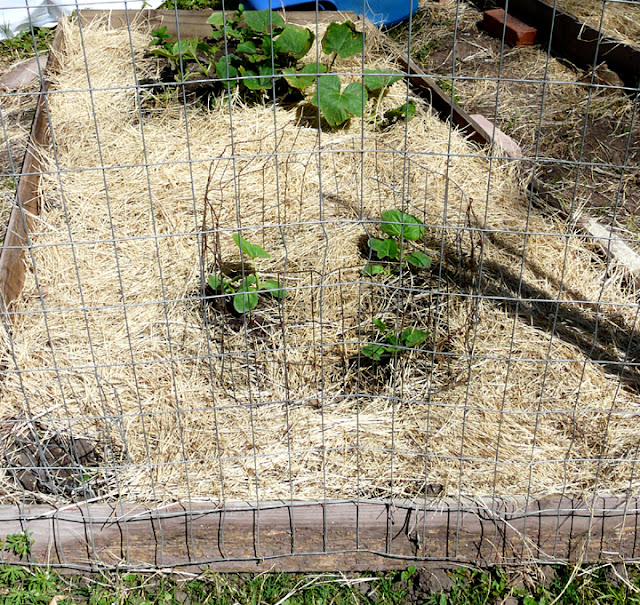 Strangely enough, some parts of the 2012 plant were still growing in the garden as we prepared the bed for our spring 2013 garden.  We maneuvered these plants into a bed and planted seeds as well.  The seeds sprouted with near explosive vigor.  This plant was eager to be a part of our lives.

I just kept referring to it as mystery squash in all my journals, but today the mystery has been solved.

It is the Tatume (Calabacita) squash.  This open pollinated squash hails from Mexico and it is considered both a summer and winter squash.  This means you can harvest it when it is small and the skin thin or you can wait for it to grow into a pumpkin sized hard skinned squash.  It is very hardy and seems to be resistant to squash vine borers.  From our experience it thrives in the heat (although does not seem to produce fruit at that time) and does well with little water.

I am hoping that we will find it to be a robust producer as well as grower.  It is know for its crowding vine habit and each vine can grow ten to twelve feet.  We have placed it well back of our garden to give it plenty of room.

So, mystery solved.  Welcome Tatume to the 2013 garden.  May your vigorous growth make you the squash of my dreams.
Posted by Julie Byrd at 9:12 PM