The chickens have come home to roost... 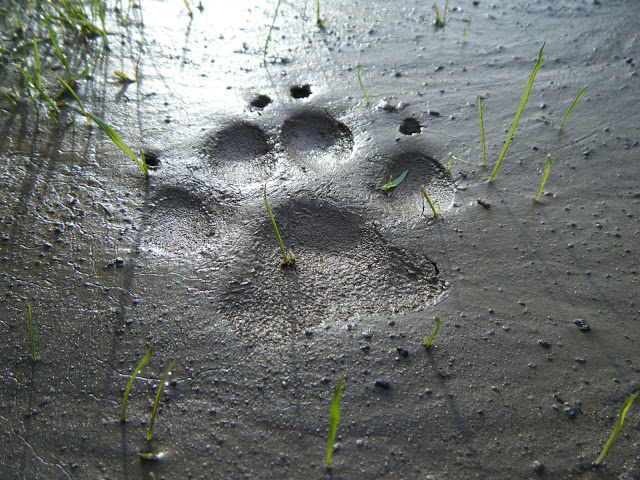 Mud chickens that is.  For the last three days we have been receiving water from the sky.  A very unlikely event for 2011.  We normally will have over 34 inches of rain by this time each year.  This year we have 11 inches to date and about an inch of that fell in the last three days.

We have become grudgingly accustomed to this year.  In addition to the lack of rain there has been many days of over 100 degree temperatures so that by now, when it is only in the mid to upper nineties, it feels relatively cool.  We have altered our lives to the extent that we water our struggling vegetable garden every single day.  We do this in spite of a water ban because of a happy little loophole in that ban.

If you water with a sprinkler system, you are relegated to watering only two days a week and those days are specified by whether your house address ends in an even or odd number.  The ban also requires you to water at certain very inconvenient times, basically from sundown to sunup.  The loophole is that you can water to your hearts content any day of the week and at any time if you hold the hose.  Now that is already our basic way of watering because it is much more efficient and effective than using a sprinkler.  If we were watering our vegetable plants with a sprinkler we would have either 1. dead plants because we would not be getting enough water to the plants we want to cherish and instead be watering the entire yard, or 2. have a water bill that pushes into four figures a month.  So the ban has not actually limited our watering of the plants.

The plants have shown their appreciation of this by dying by degrees instead of all at once.  The attrition level continues to climb as these poor plants, faced with a pitiless cloud free sun and temperatures more suited to cooking decide it is just not worth it and finally expire.  Others valiantly struggle onward.  The attrition has been worse on the cucumbers.  My husband has been nurturing and coddling these guys with cleverly placed shade cloths that he must remove at sunrise so they can get some sun but recover by noon or they just fry away.  If we get even one cucumber this fall it will be due to his undying cucumber loyalty.

In the beginning of September the 100 degree plus hatred of the Mega-Summer relented for about a week and we had temperatures in the 60s at night and 80s in the day.   The effect on everyone was transformative.  Unfortunately that kind of weather is so foreign to this part of the world it quickly continued its journey to its actual home somewhere far, far from here, but it did the job.  Mega-Summer was vanquished and although our temperatures have crept back into Summer realms, the waning daylight has effectively nixed any more of those 109 degree days.

And then it rained.  It wasn't just me who upon hearing the rain became startled and confused (what is that sound???) others reported the same.  I had to actually walk out into a pelting shower in order to seek the long forgotten umbrella somewhere hidden in my car.  It was raining - oh joy!!!

The joy has been somewhat diminished by its effect on a portion of our pathway in the garden.  At the first of the year when we were breaking ground on the new garden areas we found a brilliant solution to what to do with all the tons of clay we were unearthing.  We will just put it into the pathway and sprinkle it with grass seed and presto - instant grassy path.  We pulverized the clay and bought the grass seed and waited for a rainy day.  Fast forward about six months.  That clay path has become powder and now that it has rained enough to actually wet the soil it has become a clay bog.

This would be something that could be avoided except for two reasons.  A Border Collie and a Westie.  Now the Border Collie is doing what she thinks is a grand job in mixing up the clay for us.  It looks like a herd of Border Collies has passed back and forth through the pathway so that there are clingy little ridges of it strewn up onto the fence and surrounding garden areas.

The Westie who is older and therefore more reasoning about how staying clean will allow you better access to being allowed indoors avoids this pathway most of the time.  He does not avoid it when I am outside in the garden areas adjacent to the muddy path.  In fact, his sister the Border Collie likes nothing better than to ram his little body down into the mud any time he ventures into that area.  The net effect is muddy paws.

For the Border Collie the muddy paws are what you would expect.  A little under the nails and a little in between the pads.  For some reason, the Westie has feet that collect mud better than anything on this earth.  I was coming inside after scouting the areas I was going to plant my new squash plants (either destined for a wonderful fall garden or a continued source of plant sacrifice to the gods of unreasonable drought).  My husband was watching from the kitchen window and pointed out poor little Lewey's progress behind me.  His little feet had managed to attract so much mud they were like little puppy snow shoes, fully twice as large as normal.  His halting progress also indicated that this was very uncomfortable.  So, I scooped him up and spent a good 10 minutes in the tub de-mudding his paws.  The Border Collie also had to be debrided before coming inside.

This has all the makings of a big pain in the neck which is forcing my husband and I to come up with alternative solutions, of which there is really only one.  We have to fence off the muddy area.  Luckily we have the fencing for it, but unluckily we are out of fence posts.  This means we will either have to make the enormously bothersome trip to the lumber store or devise some alternate plan.  The problem with alternate plans is that the Border Collie absolutely loves the muddy part of the yard because that is where she has shouting matches with the squirrels, something that rates very high on the Border Collie obsession scale.  This will mean she will try with all of her abundant energy and intelligence to get around any barrier we place in her way.

It should prove to be an interesting time.
Posted by Julie Byrd at 5:00 PM