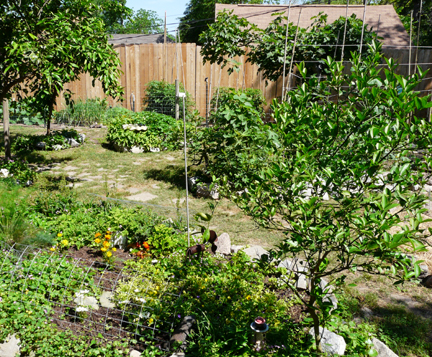 I just found a file with a bunch of pictures from April when the garden was looking so fresh and happy so I thought I would share them.  I know I tend to complain about gardening a bit sometimes (also known as whining and moaning) so I thought I would show that sometimes it is all worth it.  This is a part one because I have heaps and gobs of photos that I will eventually subject you to, but for now this is the garden as it was in April. 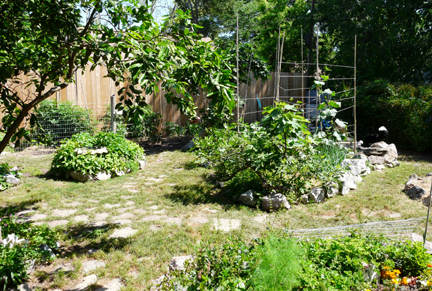 The foreground in this view is one of our original garden beds, now devoted mostly to ornamental plants and flowers.  This is mostly due to it harboring a very determined number of snails and slugs who have shown a tremendous resilience to all organic solutions.  We have tried snail bait, copper strips, ceder granules and egg shells and it hasn't even slowed them down.  We tried a beer bait lure that is supposed to entice them into drowning themselves and I think they just threw a party.  So now we don't put vegetable plants here because somehow it is less aggravating to us for them to eat the ornamentals - that way at least they are not competing for our food supply.

The middle ground to the right is another one of our original garden beds and it is hosting the cucumber patch this year.  The middle ground to the left is one of our many water stations, this one in the form of a bird bath surrounded by shrimp plant.  In the background you can see the cedar fence and part of the seven garden beds we created this year. 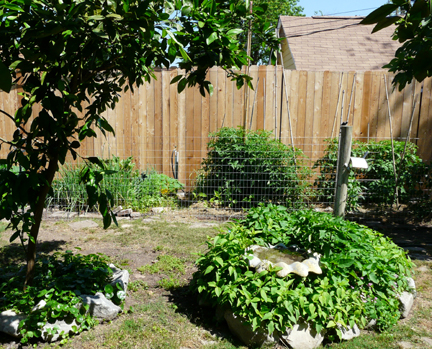 Here is a closer view of the birdbath and behind that you can see the tomatoes plants when they were still a reasonable size and I was all enthused about staking and trellising them. Here are the tomato bushes up close.  There are three of them and they used to have actual space between them.  I was valiantly trying to make them be good neighbors but even this early in the season they were proving very resistant to anything that controlled their exuberant growth.  At this point they are about 4 feet tall.  If you look to the lower left of the picture you can see a green tomato, one of the many these plants produced.