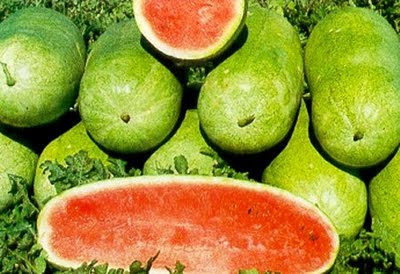 Watermelons have always been a big part of my life.  This is actually rather incredible considering that the watermelon season is so short or at least it used to be considered short.  These days one might think that watermelons are in season every month of the year because they can be found in grocery stores.  Another thing that has changed about watermelons is their size.  Today's melons are runts compared to the melons of my youth.  These days there seems to be only the 'icebox' sized varieties.  These might be convenient and fit in the fridge and sometimes they have a good flavor, however, the watermelons of today can't hold a candle to the watermelons of my past.

Watermelon season used to start sometime in late June.  You might find a few available sooner, but if you were experienced in the ways of the melon you knew there was little likely-hood of these being properly ripe.  The melon trucks would arrive and the melon stands would be set up and it was like the opening of a festival.  Usually their arrival coincided with the first really hot spell of summer.

Our family would be driving along on some other outing when we would spot a stand or truck.  We would pull over and the selection process would begin.  Now it deserves mentioning that the types of watermelon that were offered were nothing like the 'icebox' melons that litter the grocery stores of today.  These melons were so large that either they took up a substantial space in the refrigerator or they were cooled down in long coolers purchased just for such a purpose.


As I recall the two main types of watermelon were the Charleston Gray or the green stripe.  Of the two I think we were most partial to the green stripe.  There were other melons but they were less available, such as the famous Black Diamond and sometimes you could find yellow meat watermelons as well.  You never just walked up and picked a melon at random.  First you had to look it over to check for a uniform shape.  The melons in question were usually about two to three feet long oblong shaped with blunt ends.  Either they would be lined up in rows for you to check or they would be piled up in the truck.  Of course we thumped them and when we heard the right resonate sound we would bring the melon over to the proprietor.  Here there was always the ritualistic plugging of the melon which meant the melon seller would cut a triangle into the melon and pull out a chunk so you could see and smell that you had the melon you wanted.  We must have been excellent at selection because I can never remember a single time we rejected a melon.  The ritual was intoxicating though - a scent of the sweet taste to come.  Another thing that has changed in time is that I cannot recall us ever spending more than a dollar for a melon.


Once we had our prize it was a case of delayed gratification.  The melon must be chilled and that would take all day with the melon sitting in an ice chest filled with crushed ice.  By evening though it would be ready and so would we.  After dinner my father would slice the melon in half and then into four pieces.  My sister and I would each get a piece about a foot and a half long and at least a foot wide.  We used spoons and always started at the uncut rear area so as to preserve the cut end as a sort of retaining wall for all the wonderful juice.

It was heavenly and we ate as much as possible, usually making quite an impressive dent in our watermelon boats.  Of course there were seeds and we were allowed to spit them out as long as we didn't spit them on the table, floor or each other.  Usually our first foray would not complete the melon quarter, so we would cover it with foil and put it in the refrigerator for the next day.  Our method meant we would have the best part near the heart remaining for us when we came back to our share.

If we were eating watermelon outside then the melon was divided into just four pieces giving us a length nearly two feet long.  When we were outside the abundance of seeds usually led to watermelon seed spitting contests.  It was unheard of to have an outdoor event, picnic or family gathering in the summer without several watermelons on hand.  My father and my uncles seemed to have a competition on who could arrive with the largest watermelon at our family Forth of July celebrations at my grandmother's beach house.

At the beach house gatherings the watermelon seed spitting contest was an annual event and we all competed.  This was no informal affair.  We had rules, a competition area and several seed judges.  Two competitors would line up and do their best to spit a single seed as far as possible.  The victor would then go on to challenge the next competitor.  My grandmother was the odds on favorite having vanquished my other family members with her seed spitting prowess.  She didn't win my small margins either.  Her seeds flew at least a yard farther.  She said this was due to her robust health.  My aunt said it was because she used to shout at them as kids.

I was the last challenger one year.  She had been unstoppable and they actually had to lengthen the competition area just to keep up with her shots.  As I stepped up to the spit line with her I had a couple of seeds in my mouth trying to decide which one would go the farthest.  I positioned the seed I wanted to use in the center of my tongue and held the other one between my cheek and gum.  We stepped up to the mark and took our places.  My aunt held up a flag and counted us down.  "On your mark, get set, SPIT!"  I used my best technique and spit with all my might and amazingly my seed flew past hers.  There was instant celebration not the least of which was from my grandmother and I was awarded the prize.  Another piece of watermelon.  I accepted the prize but secretly I was a little mortified.  In my zest to out-spit my grandmother I had accidentally spit the second seed as well which was clearly a violation but I dug into my prize melon piece with only a tiny sense of guilt.

This summer I vow to search out the true melon.  I will not stop until I find a Charleston Gray or Green Stripe.  I will buy the cooler and the ice and when that melon is cold I will slice off a huge quarter for my husband and myself.  Then we will see who can spit seeds the farthest.  And if he doesn't watch out I might just use two seeds.