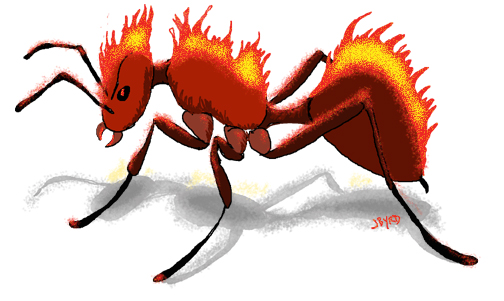 Ah, who doesn't remember their first meeting with a life long nemesis.  I first met mine when I was a child and it was as memorable as it was unpleasant.  I was outside with my mother and I stepped into a small hill of dirt. In a few seconds it felt like my legs were on fire.

I looked down to see my bare legs covered with these dark spots.  What seemed like a hundred ants were swarming up my legs and stinging me.  My quick thinking mother rushed me over to the garden hose and washed off the ants.  It was horrible for us both, me because I had been stung many times and her because she had to witness it.  That was my first encounter but not my last.  Not my last at all.

This marked a new era in the habitation of our fields.  Previous to this there had been ants, but they were in no way a bother to us.  I am not sure what kind they were, but I don't recall ever getting stung.  The fire ant, originally a Brazilian native had been steadily making its way from its entry point in Alabama since the 1930s.  It reached our fields by the 1960s and forever changed our world.

Fire ants became a constant menace of outdoor play.  All of us children became wary of any mounds of earth that sprang up in our fields, knowing this was the sign of a fire ant nest. They were not confined to a mound though.  These ants would house themselves anywhere they pleased.  At first there were not many of them, but because they were an imported species without any predator in our location, they spread quickly.  They began to invade things we would normally just keep out of the rain, such as the chicken feed.  Anything organic that did not have an airtight seal was subject to their infestation.  They would house themselves under any board or mulch or hay that was on the ground.

They were a horrible menace to all the natural wildlife of the area.  Ground nesting birds were hit hard as were burrowing animals such as rabbits.  They would attack anything and everything.  We had a couple of ducks who were attacked one night and the fire ants chewed through their webbed feet.  I have been told that ducks have no feeling in the webbing of their feet, so they did not suffer pain, but they ended up with feet that looked more like a chicken's foot.

We became very wary, my cousins and I as we traversed the fields around our houses.  Although the ants might be concentrated mostly in their mounds, they also foraged far and wide.  We could encounter them practically anywhere.  We learned to treat their stings by applying mud, the same thing we did with wasp stings.  As we had ample encounters with them we learned a little bit more about them.

When there was rain enough to flood the fields the fire ant colony would form floating masses.  These masses were a raft made up of the bodies of the fire ants clinging together.  Some of these mats would be as big as a dinner plate.  Woe to anyone who ran into one of these in flood water.  As soon as the ants came into contact with something dry they would swarm out of the water up onto it, be it trees, blades of grass or if you were unlucky, your leg.  One time my cousin and I found a small mat of ants and managed to scoop them up without getting stung.  We deposited the little clump of ants near a fire ant mound that was high and dry - don't ask me why we were being so nice to them.  The next day we came back to the mound and found a whole bunch of dead ant bodies around the mound.  Apparently the ants were very territorial and the ones we brought to the mound were from a different 'tribe' or something.  Our good deed did not go unpunished for those ants.

Back in my childhood, the ants were definitely a rural menace, as my grandmother's house in town was free of the pests.  This is no longer true.  Today my urban garden harbors these malevolent little guys and currently I am sporting about a half dozen stings.  There are no visible mounds in our yard, but if you move a rock that lines one of the beds, look out!   I made the mistake yesterday of trying to weed one of the beds and as I knelt down pulling up several handfuls of encroaching grass I suddenly felt fire.  Actually what I felt was FIRE.  Not only does the sting hurt and burn, but my body is so trained to recognize their particular pain it goes into some sort of hyper-drive mode.

I was up in an instant doing what I like to call the fire ant dance.  The steps for this dance are simple but very fervently enacted.  Step one, you slap the offended area in a downward or outward swipe.  You want to get as many off of you as you can because the longer they are on you the more of them will bite.  Step two, while continuing to swipe, you take off whatever gloves, shirt, shoes, pants, etc. to make sure they are not in contact with you.  While you are doing step one and step two, you better have been moving away from the vicinity of the attack.  They swarm in mass and depending on the size of the nest they can cover a lot of distance quickly.

I do not react well to their bites.  They don't even have to bite me to cause a skin reaction.  If one of them just brushes against my skin it will leave a welt.  If I crush one against me while killing it, even if it doesn't bit me, it will leave a welt.  They are like the Midas of pain - just one touch is all it takes.  The initial pain of being bitten would be bad enough, but a day or so later the bites will itch like mad.  This will die down in a couple of days, only to return in the next week.  It can take more than a month for a fire ant bite to resolve.

If that wasn't bad enough, they bite my dogs as well.  My poor pups will be sitting somewhere then suddenly jump up and bite like mad at their rumps.  I find fire ant welts on them all the time.  Once my poor Lewey came running to me with a fire ant biting the inside of his nose.  There are several bugs I dislike intensely, but I hate fire ants.

We try all sorts of things to control them.  We have used fire ant bait that is advertised as 'killing the queen' because supposedly the workers will bring it to her.  Perhaps our fire ant workers are more lazy than the commercials suggest.  We saw no appreciable reduction in their numbers with that 'cure'.   A friend of my used a treatment that was made from molasses and other stuff and used to drenched the mounds.  She found it effective, but it did not work as well for me. We mostly use boiling water and this is effective at least in that it will kill bunches of the ants right away.  Unfortunately it will also kill any plants growing in the area and some of the nests are around important plants.  It also is uncertain if this method gets the queen.  No matter our efforts, we still have ants.

I had big hopes for another little ant that had been appearing in our garden the last couple of years.  These tiny little ants were red colored and ran crazy zigzag lines everywhere.  Their nests were filled with huge numbers.  Amazingly, even though they have swarmed over my hands in large numbers they have never bitten me and I have never had a skin reaction to them.  My kind of ants.  They were even talked about on the news because apparently they liked to build big nests in electrical boxes, which shorts out things.  Everyone was up in arms about the 'crazy raspberry ants' and worried about how to control them.  In one of the news shows they mentioned how these crazy ants were predators of fire ants.  My ears pick up at that.  I thought with the numbers of these little guys swarming about the fire ants would be gone soon.  No such luck.  Maybe it was the very cold winter we had or maybe it is the continuing drought, but I have not seen but a few of the crazy ants this year.

I have been reading about a beneficial fly that is a natural predator to the fire ant.  It is called the Phorid fly.  These flies reproduce by laying eggs in the thorax of the ant.  The fly larvae migrates into the ants head and in two weeks releases an enzyme that causes the ants head to fall off.  The head FALLS OFF!  That is my kind of fly.

I don't know yet how I am going to obtain these Phorid flies, but you can bet I am on the hunt.  I cannot think of a more fitting end to my arch nemesis the fire ant.  The only thing that would make it better is if the head coming off the ant makes a little popping sound.  That way I might have the joy of  hearing a fizzing sound like a carbonated drink coming out of their nests.  Off with their heads!
Posted by Julie Byrd at 11:50 AM