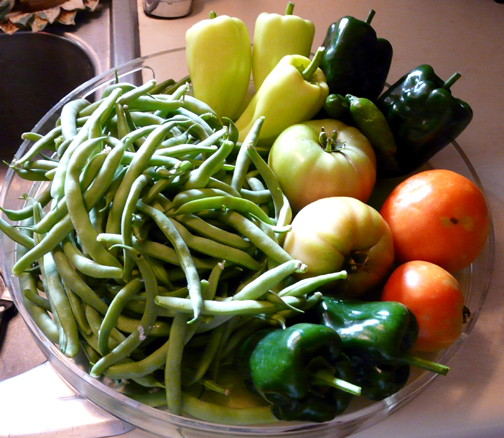 Well now that spring has ended, maybe not officially, but since we have had several days in a row of 100 plus degrees of temperature what the calendar might say is moot.  Spring is done - that ship has sailed so long ago you can't even see it anymore on the horizon.  Now all that is left is the memories and I thought it might be interesting to chronicle this years 'Best of Spring'.


In spite of months of steady drought there was some great competition in the Vegetable Garden segment of the Best of Spring and I just want to give a hand to all of the contestants in all categories.  Great job of enduring the scant rainfall and still producing some record crops.


Under the Tomato Category we had four strong contestants including Big Beef, Early Girl, Zebra Stripe and Black Krim.  You all did a great job despite a serious case of creeping late blight but as you know there can be only one winner and that award goes to Big Beef for the most awesome production of large sized fruits, virtually no blossom end rot and continued production even as the weather has started to warm up.  Second place was a tough call with Zebra Stripe producing a large number of medium sized fruits and Black Krim producing a moderate number of large sized fruits.  It was a narrow margin but I have to hand it to the Black Krim who not only is continuing to produce but also has avoided more fruit rot and late blight.  Congratulations!


Under the Cucumber Category we had three contestants including Straight Eight, Burpless Hybrid and Burpless.  For the second year in a row it was a landslide by Burpless.  You win in consistent production, large sized fruits with few seeds and most importantly a resistance to powdery mildew.


Under the Onion Category we have two contestants, Red and Yellow who started off life in the grocery section as 'Pearl Onions'.  Having cast that lowly designation behind you both of you have excelled in production and hardiness, sneering at the low twenties weather of late winter.  So it is a tie for first place.


The Pepper Category had several old favorites, Gypsy and Tam Jalapeno (mild) and some new hopefuls, Ancho, Cubanelle and Marconi.  First fruit goes to the Cubanelle but it and the Marconi suffered some early season interference from the Zebra Stripe tomato, so unfortunately their productivity was diminished.  However, there is a clear outstanding winner this year and it is the Ancho who has consistently produces large numbers medium sized dark green fruit and currently is covered with more than a dozen more developing fruit.  Second in this category goes to Tam Jalapeno who may pull ahead in the summer division of the games by sheer tenacity of production.


Upcoming Hopefuls Category.  We are keeping our eyes on our summer contenders of Eggplant, Bush and Pole beans, Okra and Sweet Potatoes as well as Golden Yukon Potatoes.  The Clemson Spineless Okra has already been producing an ever increasing crop daily and we have already enjoyed several batches from the bush and pole beans.  We look forward to your continued productivity.  All eyes are on the Eggplants who are almost ready to present their first fruits.  We expect great things from you.  The Golden Yukon and Sweet Potatoes are new to the contest this year and we have no idea what to expect.  Who knows if we will even know when to harvest them, so this could be some exciting developments.

We are also nervously watching the canteloupes and wondering what more will befall those poor vines who have already suffered powdery mildew and then leaf burn on two occasions from our attempts to control powdery mildew.  In spite of this there is renewed vigor in the vines and there are two well formed fruit and a few others that seem to be developing.  Stay tuned - this could turn into a best of or a worst of experience.


Now stepping away from the Vegetables let's take a look at the Ornamental Category.  There is a definite clear victory of blooming that must be awarded to the rogue group of Amaryllis.  These hardy bulbs stood up against bulb bias and have bloomed multiple times in the last six months.  Way to defy Amaryllis lore!


For the general Ornamental Category we had several contestants this year including Cosmos, Viola, Scaveola and Scented Geraniums.  The Viola were early winners but languished in late spring.  The clear winner due to voracious growth and toleration of the lack of rain goes to the Scented Geraniums.  You smell great, you look great and you are determined to take over your garden bed.  That's the kind of pluck we look for in an ornamental.  Good Job.


No Awards would be complete without Honorable Mentions.  Best Volunteer goes to the Cherry Tomatoes.  You started life in the backwaters of the compost piles and have gone on to delight both Dog and Humans with highly productive lives.  We look forward to seeing you again next year as well.  We also want to give a shout out to the compost pile without whom the rest of the garden would be a shadow of its glorious self.  Thanks for your continued support.

Finally we wanted to give a nod to a little guy that has a category all to himself.  Introducing the Baby Anole Lizard.  Already he has done well for himself by staying in the dog free part of the garden which shows good marks for intelligence.  He wins the award for cutest wildlife.