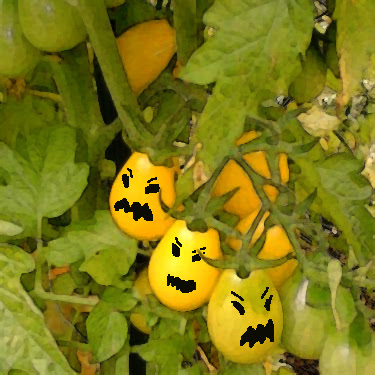 It looked just like another tomato plant which quite frankly don't normally look all that evil.  It was a yellow pear tomato and even though I already had several tomato plants, I bought it on a whim because I didn't have any cherry type tomatoes.

I am trying to remember the exact event, because it would have been nice for there to have been some cackling old woman in the background as I purchased the plant. Or maybe a roll of thunder, but that was unlikely because of our extended drought.  Maybe the drought somehow affects the abundance of cackling old ladies too - I don't know, but I wish there had been some sort of portent of doom.

I planted it in the garden bed near the first three tomato plants, which were doing very well.  At this point in the year I was still of the opinion that three plants in the six by six foot bed was not fully utilizing the space.  However, the plants were already about four feet tall and growing in a way that was quickly decreasing the space between them.  I put the pear tomato in the farthest reach of that garden bed, near the dog proof fence.

Now this was not the first year I had grown a yellow pear tomato.  One year I had the brilliant idea that since we had all these large clay pots, we should use them to grow our tomatoes.  This idea was so brilliant because it meant we could use the ground space for other plants and (this was the part I was most proud of) we could move the pots to whatever spot in the garden seemed best.  It was the best idea I had ever had on paper.  So we filled up three huge clay pots with what we felt was a 'tomato growing' mixture of sand, topsoil and compost.  We positioned each pot in a strategic area and planted them with tomatoes.  One tomato was a bush type, one was a Roma tomato and the third was a yellow pear tomato.

This all started out great, but forget moving those behemoths.  The best you could do was turn the pot and even that took some effort.  No problem because they were 'strategically' placed.  The plants grew wonderfully.  Now tomatoes are a vine in that they will grow up straight and tall for a short time then they will flop over unless you trellis or stake them.  Putting them in a pot that starts their ground level at about three feet high seems to accelerate the 'flopping over'.  So we staked them, which meant we had these three foot tall pots with six or seven foot tall poles sticking out of them.  It looked like very bad modern art.

But back to the yellow pear.  That potted plant grew fabulously and began to set what looked to be an enormous number of fruit.  Then I noticed a couple of brown leaves.  No worries, after all it was in a pot and maybe it was not able to retain enough moisture.  I gave it a good watering and also topped the pot with a mulch to help it retain moisture.  More leaves began to turn and soon I was wagering whether the fruit it had set would be able to ripen before the plant succumbed to whatever was going wrong with it.  I think we got a couple of tomatoes from it and then it died.  I just chalked it up to the 'putting tomato plants into pots was a stupid idea' scenario I had manufactured and my general gardening amnesia blotted the incident from my mind.

So, I was looking at this yellow pear tomato in this years garden and it was putting on all sorts of great fruit.  My mind had a little shudder of deja vu.  I brushed it off.  The plant looked great.  Then I noticed a brown leaf and my deja vu came over and kicked me in the shin.  I said "No, No," as I clutched my imaginary shin, "This means nothing."   The decline was dramatic and the plant went from 'happy little tomato' to 'sad and wilting - won't you put me out of my misery' within about a week.

I think the instructions for this kind of tomato staking said something about cutting off the side shoots that sprout up from the tomato vines, but I don't do this because it causes me guilt.  Yes, I don't just have plantricide guilt from thinning seedlings and pulling up weeds.  I also have a form that says to me "Hey, you could root that cutting -and if you don't you might as well just be committing plant murder."  Someday I am going to sit that weird part of my mind down and tell it what I really think of all its anthropomorphic tendencies.

So, oh yes, back to the yellow pear tomato.  It wasn't happy just dieing by itself - it sent it evil little whatever into the other tomatoes in that bed and they began to die off as well - which was really tragic because they were sporting a huge, enormous, tremendous quantity of fruit.

I rushed to the almanac of plant diseases which these days is the internet and found out that what that evil little yellow pear tomato had done was bring in a case of late blight to my paradise.


Late blight according to helpful UMass Extension: "is caused by Phytopthora infestans is the most severe disease of potato and tomato. The pathogen, the cause of the Irish potato famine of the 1840's, caused widespread starvation and immigration. The pathogen spreads easily on wind and rain and is capable of destroying entire fields in a few days. Late blight is extremely destructive when not managed, quickly killing foliage and infecting fruit and tubers."

So the evil little yellow pear tomato had brought the tomato version of the Irish potato famine to my garden.   I managed to keep the tomato plants alive by constantly spraying them with fish emulsion so they could at least ripen the fruit they had set.  This worked and in fact right now the plants are rebounding - not that they can set fruit in our 90 - 100 degree temperatures, but it does my heart good to see them recovering.

They look atrocious though with masses of dead leaves and stems.  The yellow pear that started it all.  I pulled its evil little body out as soon as I realized its treachery.  No guilt for that one.