When you have something that dominates your life, you tend to take a lot of photos of it.  That is especially true of me and gardening.  Recently I collected my photos through the years and in organizing them I put them into folders according to plant types as well as a few other designations.  The computer brings up the files in alphabetical order, so I thought I would go through them with you that way as well. 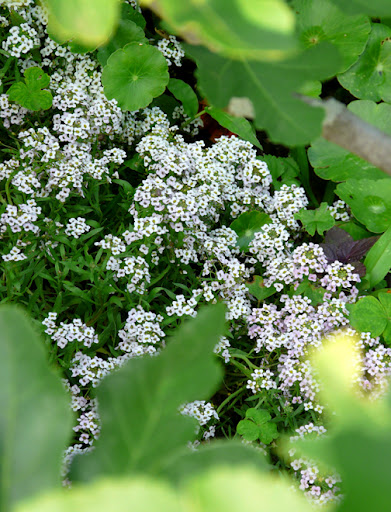 Starting off the A category is a lovely yearly favorite of mine - Allyssum.  Its dainty little flowers create a sweet smelling carpet.  It definitely wants things to be cool though.  Once the heat gets going little Allyssum will gradually just seem to vaporize.  First go the flowers and then the plant just shrinks back into nothing.  I have had better luck with it in pots rather than the garden bed. 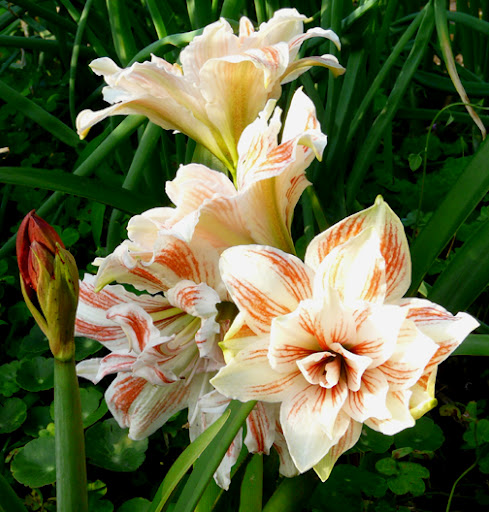 One of the fabled, ever-bearing Amaryllis.  Since these are given to me from someone who forces the bulbs each year, I am always pleasantly surprised to see what blooms they will have.  I have no idea what this ones pedigree is, but it likes to bloom several times a year. 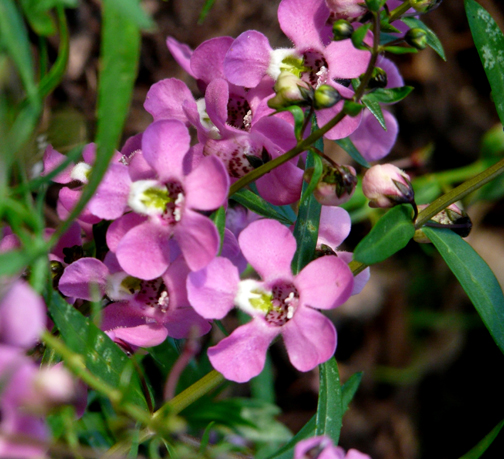 This is Angelonia which I put into the garden for the first time last year.  It managed to make it through August and then the two low twenties freezes we had last winter.  So not only does it have these masses of orchid like bloom clusters, but it is hardy as well.  My kind of plant. This little guy is Barcopa.  I tried him last year and at first things were great and it grew and bloomed very happily.  Then it just died.  So, it has entered into the category of plants I have killed. 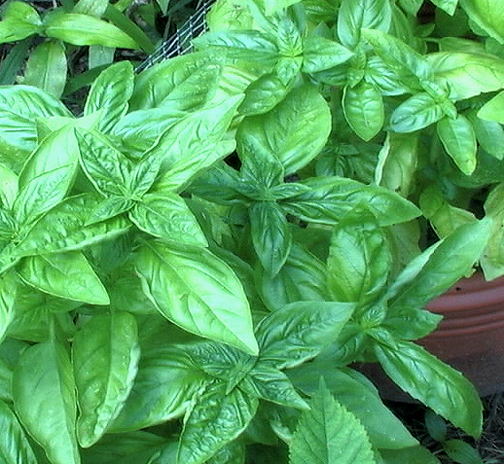 Ah Basil.  A true gardeners friend in that it will grow very well with little effort.  I love it for its aromatic leaves as well as for eating.  Unfortunately it is another plant that finds hot weather offensive. 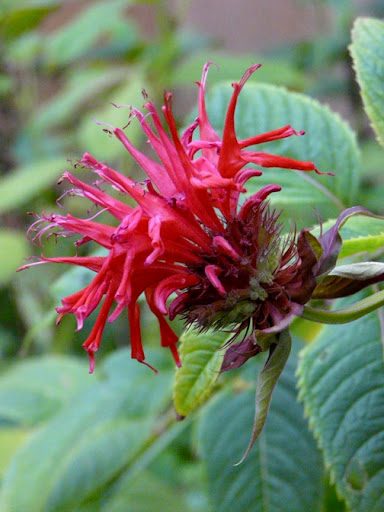 Here is the bloom of another plant I tried last year for the first time.  This is Bee Balm or Bergamot.  It also survived punishing heat and icy cold which puts it into the category of plants I have not yet killed. 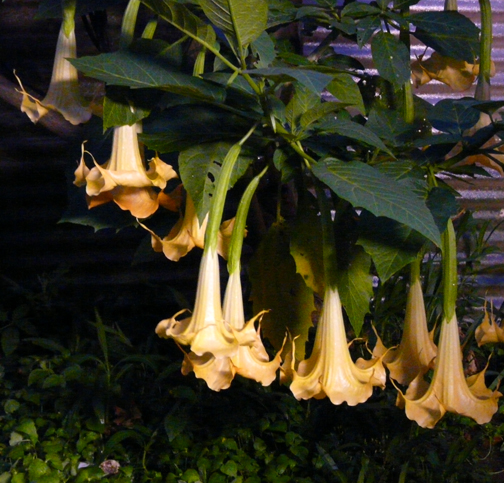 This is Brugmansia also known as Angel Trumpet.  It is a tree like bush that will produce hundreds of these trumpet shaped blooms.  They hang almost a foot in length and give off a heavenly scent at sundown.  To see one of these at their peak of blooming is amazing.  Your mind does not want to believe a plant like this can exist.  The bonus is that they  are very easy to grow from cuttings and even though the winter is tough on them they will come back from the roots.  Their problem is that they like it shady and wilt in the heat. 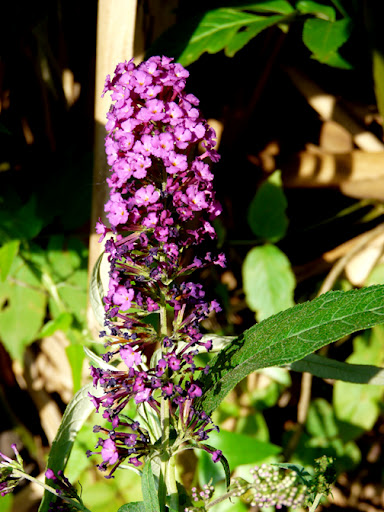 This is the bloom of Buddleia or Butterfly Bush.  I had high hopes for this plant because of its great blooms and because it was touted as growing into a tall mass which I wanted to use to shade some tall ginger.   It was one of those I tried last year who just up and died.  Too bad.

This is Bulbine.  This is the view of its stalk atop which are a mass of these yellow flowers in a cluster.  This one has been surviving well and I was surprised because its leaves make you think it is a succulent that cannot survive intense cold.  Apparently it is much hardier than it looks because it just shook off the cold and has come back rowdier than ever. 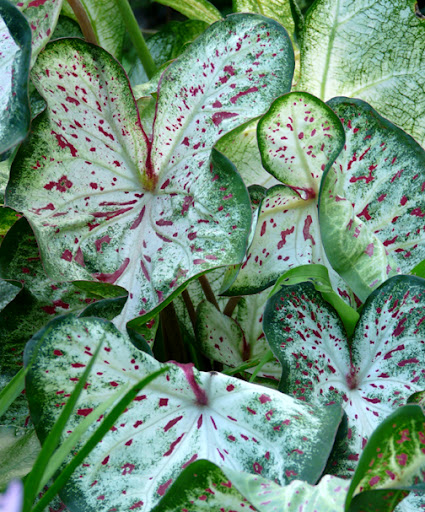 I have a thing for Caladiums, but I also cannot get in rhythm with them.  Due to our overly wet winters, the bulbs seldom are able to survive more than one season.  They like it in the shade and they don't like intense heat.  Since they are planted as a bulb I am never sure exactly when to put them in to maximize their incredible leaves. 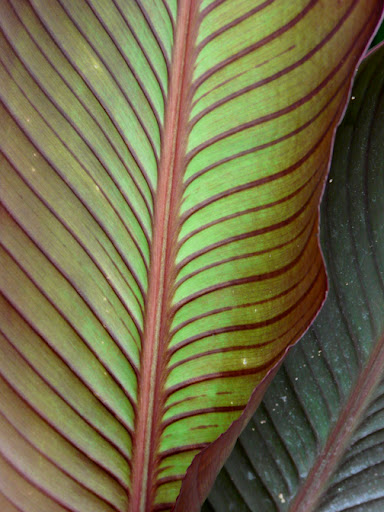 This was the hardest of the plant pictures to choose from since I assigned myself the limit of only one picture per plant group.  Cannas are one of my most prized plants.  This variety has such great leaves that I thought this view was better than the blooms. 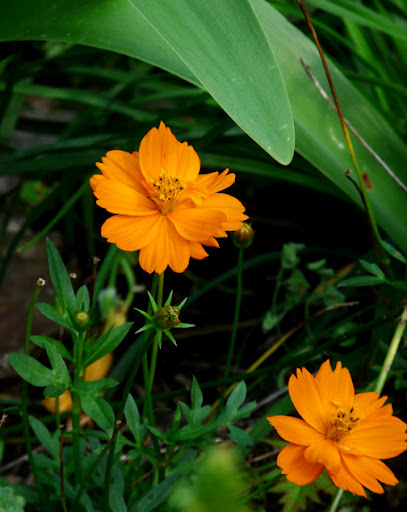 This is Cosmos and I like them because they will bloom and bloom and bloom.  Right now the bed I have them in is being slowly overtaken by the Scented Geraniums I put in this year, but this one valiant Cosmos is fighting back. 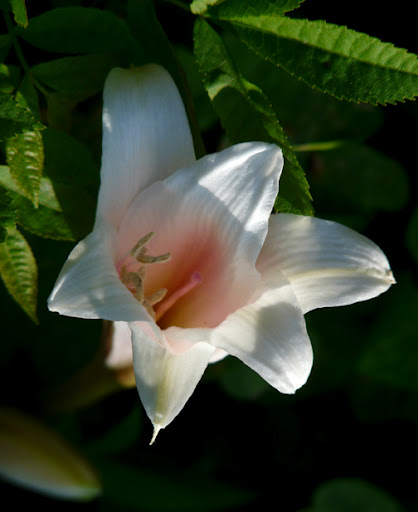 I had this plant for years before I ever knew what it was.  It was given to me from a defunct greenhouse.  I liked it for its huge curling strap like leaves and its trumpet shaped blooms that arrive several to a stalk.  This it turns out is Crinum.  There are many different varieties but I have no idea which one this is.

That is enough of the plant alphabet for now...
Posted by Julie Byrd at 4:07 PM