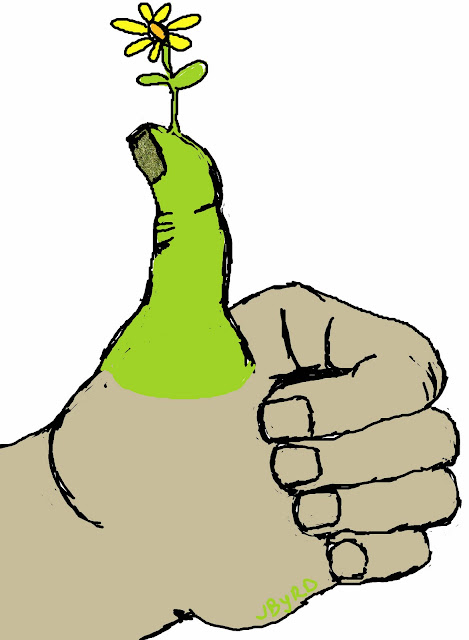 What is most amazing about this is that mere weeks before the gardening hunger begins I have totally sworn off gardening and have decided to just let everything die from the heat, mosquitoes and drought that the endless summer foists upon us each year.  Yet every year there is this revival.

It all starts out great too.  Usually by the time I am psychologically recovered from the summer, winter is in full swing, which around here means I have to put on a sweatshirt over my t-shirt.  Sometimes is gets cold enough that I have to strategically layer much of the clothing that I own in order to keep warm - and that is while I am in the house.  Living in an area where heat is much more prevalent than cold means one never develops much cold tolerance.  Either that or the humidity makes it seem much colder than it is.  They have a wind chill factor but what they really ought to have is a humidity chill factor.

Anyway, while I am all cold and everything I usually settle down with my gardening books and plan the ultimate garden.  Sometimes this means building new garden beds.  This year I was in heaven because we removed an old hedge which opened up the space for seven more garden beds in addition to the three we already used.  Of course what that meant in an all too real way is that we had to break the ground for seven more garden beds.

And these were not small beds either.  These were six foot by six foot plots.  For those of you who do not suffer from gardening, let me explain.  To create a new bed you must first dig down into the rock hard, never before turned earth.  We don't skimp on this either - we dig down at least three feet.  This means digging through roots and more roots before finally reaching a morass of clay.  We remove the clay which of course is the heaviest dirt possible.  Placing the clay aside to do God knows what with we then put back what soil is left.

Now of course this leaves us with a six foot by six foot hole.  Not to worry because you don't just plop the plants into regular dirt, you have to 'amend the soil' which is just a fancy way of saying you have to put other kinds of dirt and 'things' into your dirt to make your plants happy.  So we add in peat moss and sand and compost.  Each of these amendments means you have to turn the soil again.  And then again because you want it to be thoroughly mixed.  And then again because, well just because.  This is very difficult to do by yourself and in some ways equally difficult to do with another person, especially one who keeps pointing out places that you have missed and pointing out roots that need to be pulled out... and pointing out clay that needs to come out... and pointing out weeds that need to come out until you are seriously considering amending the soil with your significant other.

Now you say, with all that work done, now you can plant.  Well no.  Since you added all that amendment you now have a six by six foot raised bed that has to be buttressed with bricks or rocks or wood - but not just any wood don'cha know because treated lumber can leach all sorts of nasty toxins into the soil, so you have to use expensive wood like redwood or ceder.  So now you have a raised bed that is six foot by six foot and filled with a wonderful mixture of amendments.  And then you wait two weeks.  You don't plant immediately because you want the earth to sort of settle a bit and anything that might be 'in there' to decompose and settle down or else, God Forbid, your plants will act all puny or something.  Multiply all the above by seven and you will understand why my husband and I often move around like we are geriatric ex-football players at certain times of the year.

Finally you get to plant something. What you plant depends on when you finally get done with all your bed excavation stuff.  We finished our first two beds in time to plant a winter garden filled with turnips, spinach, radishes, carrots, parsley, cilantro, mustard greens, lettuce and onions.  This means we put a whole lot of seeds down and then... nothing happened.  Water it and nothing still happens until finally when you are again reading the labels on the plant seeds to see what you have done wrong you see your first sprouts. This always makes me feel powerful.  "Look!" I point out to my husband, "The SEEDS are sprouting!"  He has been with me long enough to know that he has to acknowledge this with a "That's great!" instead of what he truly thinking which is "Great.  Weeks of backbreaking labor and I'm supposed to get excited about some bits of green.  How does she know those aren't weeds?"  And they could be weeds, but I am willing to celebrate anything green at that stage.

Now a six by six foot expanse would seem to be capable of holding a lot of garden plants, but not really.  Plants don't just need soil, they need space.  I typically ignore the spacing directions on the seed packets which means my beds are soon overgrown with plants.  After the 'seeds are sprouting' excitement comes the uncomfortable time of reckoning - thinning the seedlings.   I know the gardening books and magazines all say things like 'You can use the thinned plants in salads', etc, but that does little to assuage my guilt.  After all I planted the seeds and they valiantly came up and now I am depriving them of their God given right to grow and live happy little plant lives.  I usually am over this particular guilt phase after about the third week and I can pull up plants with wild abandon.

Now my husband's gardening obsession, besides getting the soil 'just right' is putting in the warm weather plants as soon as possible.  He wants to plant tomatoes in February which if we did we would be looking out at tomato-cicles especially this year when we had several weeks in the 20's.  What we end up with is several plants living in the house with us.  We give them their own light and all, but they are grumpy because they know just outside that door is a completely inappropriate season for them.  Every time I walk by them the seem to glare at me and shiver just a little bit.

My husband is great at spacing plants but he has to contend with me.  He put three tomatoes into one of the six by six foot beds and I was all "But they are too far apart and I can't put anything else in there," and then I groused about having only four more beds, plus the other three beds we already had.  "Barely enough," I moaned.  Later in the season when the three tomato plants are cramped and  competing with each other because they are actually too close together he will give me a knowing look.  "Yeah, yeah, yeah," I will mutter.

That is where we currently are right now.  All the new garden beds are planted as well as the old beds and we are very overgrown but it all looks marvelous and it is all producing such copious amounts we are the cornucopia of vegetable product to our family and friends.  That is all about to change because although it has been a truly great spring following a colder than normal winter, the bugs are about to begin a steady war of attrition.

Already we have some sort of fungus on the squash caused by all the humidity and oddly enough the lack of rain.  I have begun to fight it with what is recommended in the organic guides.  They suggest wetting down the leaves with liquid seaweed or diluted milk(?), or diluted urine(?!?) to help combat the problem.  We have fish emulsion which I reasoned was just one step up from seaweed so I have used that.  It sort of works, but I know these plants are doomed.  I might be able to prolong their miserable lives but they will never be the way they were just a few weeks ago.

I picked a couple of tomato horned caterpillars off of the tomatoes but those are more of a mild nuisance.   What I really dread will happen in the next few days, heck it is probably happening as I type.  The stink bugs.  These are not actually stink bugs but are what are called leaf footed bugs, however, they stink when you crush them so who cares about their leafy feet.  Once they start I will be in an all out war that I will gradually lose.  I use a 'hand picking' method which means I grab them with my gloved hands or knock them off into a bucket and then stomp on them.  The first couple of times I am stricken with guilt, but very shortly I become the bug huntress and it is all out war.

Along with the garden eating bugs will come the droves of mosquitoes so that every foray into the garden means I will have to suit up with long sleeves, long pants, mosquito netting and spray it all with mosquito repellent.  Even doing this I will average about a half dozen bites per gardening episode.  I am just so delectable to them they will teleport through the layers of clothing and bug spray to get some of me.

It is about that time that the joy of gardening becomes the desperation of gardening.  I am owned by the garden and it transmits its needs at me constantly.  It needs water; it needs weeding; it needs harvesting; it needs trellising.  If I miss any of those things I feel guilt... until August.  August is both a hell on earth, but also a reprieve.  No longer does anything I do in the garden matter.  It is all going to bake to death by the relentless power of Mega-Summer.  No plant can set fruit and in fact most plants just give up and die.  Those few that hang on look at me with pleading leaves, "Kill me," they whisper in dry choked voices, "Killll meee," they beg.

I flee the garden not to return until the weather breaks.

Email ThisBlogThis!Share to TwitterShare to FacebookShare to Pinterest
Labels: garden